Lunchtime. Between assignments I find myself in a familiar town. I'd been here before photographing what at one time was one of the largest opencast coal mines in Europe. By then it was one of the largest scars in the landscape, unfortunately a not uncommon sight in south west Scotland. The opencast mine closed only recently and there were plans to redevelop site but nothing much had changed on my return.

The view from the town is dominated by what looks like a small hill. It is actually a bing, a pile of spoil from another local coal mine. Not content with one big pile of waste people seem to travel from all over the area to add their old bricks, mattresses and children's toys to the pile. It wasn't that which annoyed me so much as the thought that this old coal mine - a victim of Margaret Thatcher's destruction of the industry - remained blotting the landscape after thirty-odd years.

But I was wrong. It turns out that Thatcher hadn't even got around to snatching the weans' milk when Auchlochan Colliery closed in the late 1960's. So it was worst than I had assumed, this mess had remained here for forty five years. No wonder I found the town a bit grim.

But I was wrong again. This wasn't a blot on the landscape waiting for nearly half a century to be removed, this is a historic site!

So now I'm angry that people come and spoil the spoil. But I was grateful to whoever left the trike. 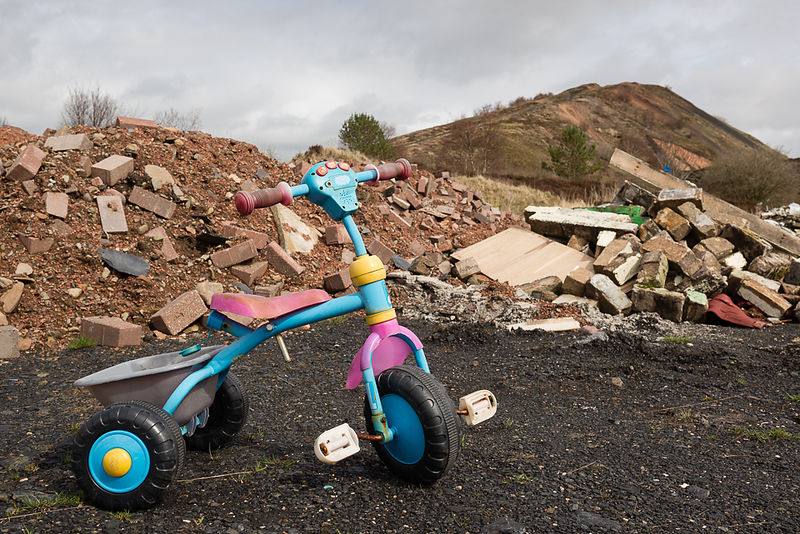 Bing bike
A child's tricycle lies abandoned among the fly-tipped rubbish at a former coal mine in South Lanarkshire.