I have no idea if the Loch Seaforth had a Deck 6 - I'm either too young or too old to remember - but the Loch Seaforth does. See, that's what happens when you allow the general public to name your shiney new ship. They get all nostalgic and try to travel back in time: back to the days when you had to have your car hoisted onto the top deck for that midnight sailing to Kyle of Lochalsh and beyond.

The Loch Seaforth was late into service. Well, there was a war on you know. But, at least according to local folklore, she was reliable. Something put down the the 'fact' that it was powered by a couple of captured U-boat engines. The Loch Seaforth followed in the Loch Seaforth's wake and she too was late. It wasn't that engines had to be captured from the Germans: this time someone had to go and steal away the whole vessel before it went adrift as the boat's builder became bust.

No doubt you'll recall my cowardly reasons for staying out on Deck 6. The Loch Seaforth reinforces my fears with its narrow labyrinthine passageways. Somehow the ship's architects manage to make a bigger boat feel smaller: a kind of TARDIS in reverse, looking larger on the outside than it is on the inside. Controversially there isn't even a bar on board to keep me below deck so I stick outside and hope the Loch Seaforth doesn't repeat the history of the Loch Seaforth. 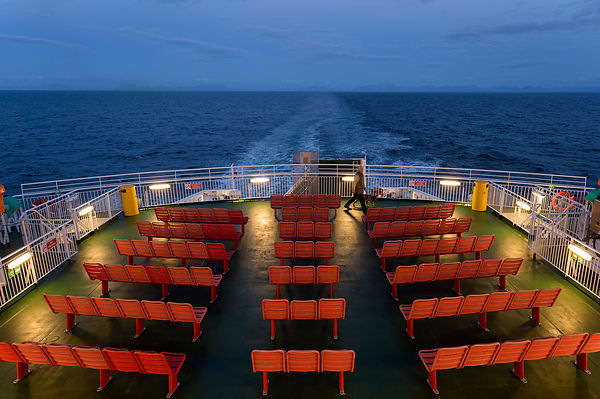