Remember the ferry, to keep it tied up

Typical of our times it is an amateur columnist who breaks the news that there will be a Sunday ferry to Stornoway. The MV Isle of Lewis will no longer sit at rest quietly with the rest of the Isle of Lewis. CalMac, in the wisdom of their counsel, have decided that to deny non-believers the right to travel is inequitable. The ferry is available for Muslims to travel (or not if they don’t want to) on Fridays, for Jews on Saturdays but atheists don’t have the choice not to travel on Sunday even if they don’t want to. The Lord’s Day Observance Society reacted in an expected way suggesting this might be a bad idea and that they wouldn’t “lie down and take this”. At least that’s what I thought they said - but maybe they didn’t as all reference to that ironic quote has been expurgated from the interweb. Perhaps it was wishful thinking on my part, hoping someone would point out lying down was exactly what was expected. It was after all the method of protest undertaken by the ‘Ferry Reverend’ Angus Smith when the first boat sailed to the Isle of Skye on a Christian Sabbath day in the 1960s.

Its easy to make fun of fundamentalists but many people have sympathy with their fear for the loss of a genuine day of rest. While these days it is possible to obtain a curry and a pint of lager on a Sunday you still can’t buy a loaf of bread, a pint of milk or a Sunday Post until Monday.

But the romantics for another age have probably been away for thirty years and forgotten the endless, monotonous day with nothing to do unless you wanted to be told what a miserable sinner you are and how soon you'll be in a different hell. Or perhaps they haven't fully thought through why there are so many abandoned crofts and croft houses in Lewis, why the population is declining, why all the clever kids leave and aren't coming 'home'.

While the joyless Wee Frees think non-Christians are heading for hell, for many any day of the week on board the Isle of Lewis ferry is hell. I usually spend the endless hours on deck taking endless photos of Deck 6. Its become a habit started in the vain idea that I might be able to recreate an earlier image (taken on board the Suilven), only better. I now realise the error of my way, but its too late and I’m doing nobody any harm. Maybe if I hadn’t gone to see the Poseidon Adventure in the Stornoway Playhouse all those years ago I’d be down below with all the other passengers scoffing macaroni cheese for tea. Anyway, I enjoy the change from working as a professional photographer on assignment to being able to take pictures with no pressure and in any style I fancy. Which, of course, means while I believe the photos are interesting and exciting others might say they’re an example of how not to photograph.

Chips or potatoes with your macaroni, a’ghraidh? 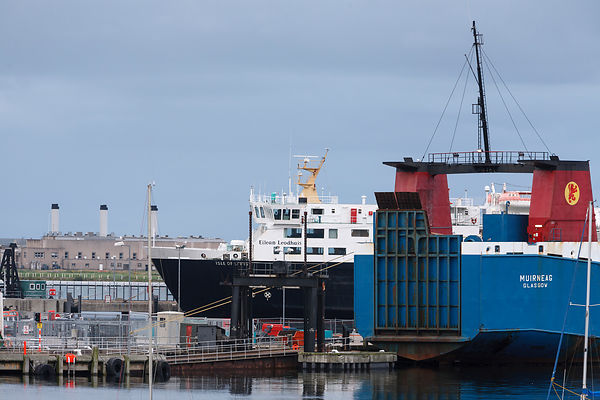 Isle of Lewis and Muirneag ferries
The freight ferry Muirneag and the passenger ferry 'Isle of Lewis' berthed at Stornoway.